Are there any bicycle riders in
the audience?

Here’s an example of passive
isolation: road vibrations pass from wheels to handle bars,
possibly damaging your hands and arms.

Consider soft, cushioned
gloves to “isolate” your hands from the handlebars.

At higher road-generated
frequencies, the handlebars still vibrate, but displacements
are smaller, less troubling, less likely to damage you.

Consider bonded isolators.
Metallic or plastic pieces were placed in the mold before
the mold was filled with liquid elastomer.

Once (many years ago) all
electronic “black boxes” were thus isolated from aircraft,
automobiles, etc. because components such as vacuum tubes,
relays, etc. were so delicate.

It is difficult to visualize
early car radios in the automobile trunk, or racks of radio
equipment in aircraft and tanks, “floating” on soft isolators.

Some in the audience had a hard
copy of my slides, I asked them to please look ahead at Figure
15, while I performed a little demonstration using a spring
and mass. I wanted to illustrate the words “isolate” and “isolation”.
(Demonstrated)

Then I suggested that we
instead use a controllable source of vibration (an electrodynamic
shaker – similar in principle to an electrodynamic loudspeaker)
to drive a simple one spring, one mass load.

I pointed out when we drive
the load at a very low forcing frequency,
Ff << Fn
sprung mass (response) displacement D = input D. Since they
are equal, their ratio (called transmissibility or magnification
factor or gain) = 1.

If we advance the forcing
frequency until it matches the “natural frequency” of the
spring-mass system, so that
Ff =

We call this condition Resonance.

How much greater is sprung
mass (response) D than input D? That ratio is often called
“Q”.

Today’s discussion, however,
centers on isolation. Watch this next video clip, in which
we have further increased Ff.
Ff >> Fn

We call this situation ISOLATION,
our subject today.

Now that we understand what isolation
does for us, let’s examine the engineering involved.

Consider the SDoF “behavior
chart” family of transmissibility curves. Note that
the “region of isolation” commences where

(where all the curves cross)
and extends to the right.
At the end, Wayne had time to explain C / CC.

When we employ passive vibration
isolators, we select isolators with soft spring rate K (giving
us a large static deflection d)
so that our Ffis
higher than 1.414 times our natural frequency Fn.

This is possible when we
know the forcing frequency. (slide off)

Please guess: which system
has the higher natural frequency. The two springs are identical
– have the same stiffness K.

Back on Figure 3, a typical C/CC is 5%, so that resonant magnification “Q”, a brief experience
while a piece of rotating machinery is coming up to speed,
is perhaps a tolerable 10.

(return to fig. 5) However, elastomers are not
good at temperature extremes.

Steel coil springs make excellent isolators,
but their “Q” can exceed 100. Thus the spring at left is surrounded
by an air bag that “breathes” through an orifice. Air
friction lowers “Q”.

We have been discussing a concentrated mass
on a single spring – that oversimplifies the “real world”.

Let’s mentally shift to a “black box” that
can be described as a volume of many springs, many masses
and many dampers. How will we isolate that?

Over time, big old radio receivers and transmitters
and other electronic hardware went “solid state”, they got
smaller and more rugged, so that isolation today is seldom
used in commercial and personal electronics.

One exception: the hard disk drive (HDD) inside
your computer generates some vibration, may trouble other
HDDs nearby. Certainly vibration radiates from the computer
as sound.

In the other direction, HDDs are vulnerable
to vibration and shock (such as a laptop computer being dropped
or the extremely severe shock of the HDD being “clicked” into
place in a rack or chassis – likened to an ammunition clip
being clicked into a gun).

A solution: cushioning between the HDD and its housing. We’ll
look, a bit later, at “air bags” and inherently-damped cable
isolators. But for HDD problems, small pieces of elastomeric
material are inexpensively molded and quite easily inserted. 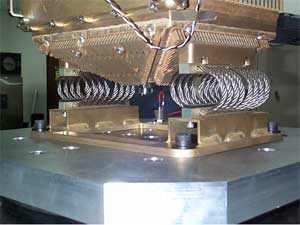 In a sense, history is repeating.
MIL services seek COTS equipment (NDE or non-developmental
equipment) in military applications that (among other damaging
environments) often reach temperature extremes and that involve
severe vibration and/or shock.

Computers and other equipment
may be “cocooned” inside temperature-controlled, vibration-and-shock-isolated
boxes.

Figures 11 and 12 show preparation for an explosive barge test, as in Video Clip 4.

The shocks received by that equipment resemble (to a degree) the shocks that would be received in actual service aboard a surface vessel or a submarine in the event of a “near miss” explosion, with energy traveling through the water and through the ship’s structure.

The degree of that resemblance is often described by SRS – the Shock Response Spectrum. Are you involved with SRS? Perhaps you’d like to telephone me.

Let’s talk about Isolator Selection Suppose that an assembly within the “cocooned” equipment resonates at 10 Hz, Fn=10 Hz.

Suppose further that the
only isolators available result in natural frequencies
Fn of
100, 10, 5 and 2 Hz. Which should we use?
4 diagrams, much pointing, discussion.

What have we learned?

Let’s discuss isolating active equipment – machinery. Is a shaker used in your lab? Undesirable vibration is introduced into the buildings in which shakers are used.

Let’s isolate our shaker,
using elastomeric springs. Perhaps we need to test down to
10 Hz. Isolators with static deflection d
of 0.4 inch or 10 mm will give us a natural frequency Fn
of 5 Hz. This should work fairly well.

Suppose that test specs
change. Now test down to 5 Hz.

If test Ff
matches 5 Hz isolation system Fn,
the shaker body will move out of phase (with the load) with
large relative displacement. Shaker stroke may be reduced
thereby.

We could use air bags for
greater static deflection d as
in picture. That would not be very stable.

A better remedy: increase
shaker body mass. Attach the shaker body to a 10X or 100X
concrete mass (in a below-floor pit) which in turn is isolated
from the building.

Let’s diagram our hardware. We have a “sprung
mass” M and a spring with stiffness K.

We also have a friction or damping element C.

C is not always visible, but is always
present. No system exists without some damping.

Consider the suspension of your automobile,
supporting the body mass. You have four springs.

You also have four friction elements, variously
called dampers or dash pots or shock absorbers. Don’t try
to drive without them!

Here are some friction elements – dampers –
that you can see.

Visualize strands of stainless steel wire twisted
into a cable and then wrapped into a helix. Rubbing (friction
or damping) accompanies flexing of the isolator assembly.

I promised that if I had time, I’d explain those C/CC
ratios we saw earlier in Figure 3, identifying members of
the family of transmissibility graphs. C represents how much
friction or damping we have, while C/CC
represents a specific amount of friction or damping, called
“critical damping”.

Attempts to show what we mean by the phrase “critical damping

Video Clip 5 brings you the best example (that I know of) of critical
damping. Immediately after the howitzer fires, expanding gasses
and the projectile exit to our left. The reaction force immediately
drives the barrel to our right, from which it returns to its
starting position. We don’t want it to “spring back” immediately, however, because it would then oscillate about the original
position. Instead, a “dash pot” extracts energy, converting
motion into heat, and greatly slowing down the return journey.

BG-PWB pads pulled away by sudden shock. This weakness not observable by any known test.

Close-up of ductile rupture from previous slide. Estimate that only 10% was a real solder joint.

To summarize…
We reviewed the purpose of isolators and demonstrated isolation
to you. First I hand-activated a spring mass model. The you
saw a video clip of a demonstration on a shaker.

That led to the concept of transmissibility
or magnification.

We saw the role of damping or friction in limiting
the magnification “Q” value to say 10 if we must pass through resonance in coming up to speed.

Following Wayne’s presentation, several people
asked for CD-ROM copies of Wayne’s PowerPoint slides. Hence
we are posting them on our Web site.