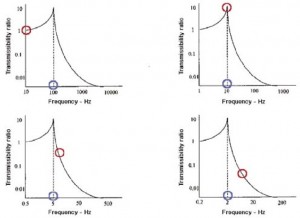 Which isolators to use?
The four SDoFs have natural frequencies of 100, 10, 5 and 2 Hz, per blue circles. Troubling helicopter vibration is at 10 Hz, per red circles. Which isolator set wil best protect your “black box”?

The 100 Hz fn set of isolators (upper left, Figure 5.4.3) is too stiff and accomplishes nothing. Transmissibility (another word for magnification) is about 1.

Too soft
Unfortunately, those 2 Hz isolators are too soft for “the real world.”

Why? To achieve 2 Hz fn, static deflection δ must be about 2.45 inches or 62 mm. In straight and level flight, with only the 10 Hz vibration present, the 2 Hz isolators will “do the job”.

Helicopter maneuvers
But helicopter maneuvers (such as a hard landing) would cause a large downward excursion, large displacement of the “black box,” likely colliding with nearby structure. You can’t take that risk.
Be satisfied with 5 Hz fn. With forcing frequency 10 Hz an octave higher, transmissibility 0.2 should be satisfactory. Your “black box” will “feel” only about 1/5 as much vibration as does the electronics rack in which it’s mounted.