An example of severe “in service” environments: rocket liftoff, with its extremes of climatic environment temperature and its extremes of dynamic environments vibration, shock and noise. Less severe environments are found in the engine compartment of your automobile, but here, too, electronic and other hardware must survive and function properly, for a much longer lifetime. Here, too, then, environmental testing can save a manufacturer much time and money by avoiding owner-experienced failures, warranty expense, etc.. University lack of environmental test training is mentioned again in my third-from-final paragraph. 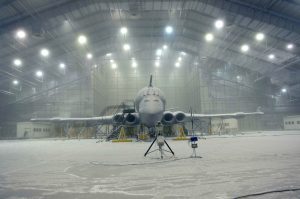 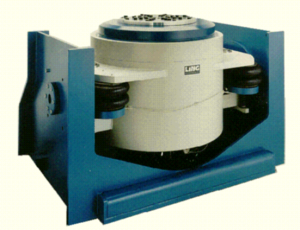 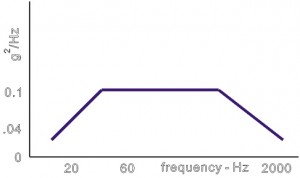 Multiaxis shaking better
99.9% of the world’s vibration testing at present is performed single-axis-at-a-time, necessitating three highly unnatural single-axis tests, shaking in the product’s X, then Y, then Z axis. There is a distinct trend toward multiple shakers, as in a frame from Video Clip 16.4.10. Costly, they require three costly power amplifiers. A single multiaxis test is faster and often finds failures missed by single-axis shaking. 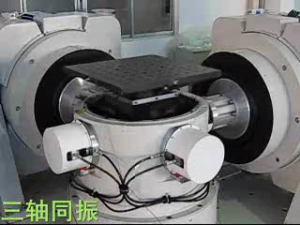 Increased severity
Storage environments and in-service environments should be known by climatic and dynamic on-site measurements. Test lab severities and durations should be slightly more severe.

Don’t be deterred
Don’t be deterred by the inevitable whining “It’ll never see that in service.” Rarely is it germane. We are trying to identify weaknesses that can cause costly, sometimes life-threatening failures.

Failures should be welcome
Better to fail during environmental testing than to fail in service, endangering a military or a commercial activity, endangering people, often leading to warranty expense.

What caused the failure?
Failure analysis can be difficult. Finding the precise cause of a failure can necessitate the hiring of a specialist.

Redesign product
Once the weakness has been identified, redesign the product. Make new models and test them. Eventually you’ll have a rugged product.

Sometimes called ESS, HALT
Multiaxis random vibration can be less-expensively generated by angled pneumatic vibrators attached to the bottom of a softly sprung horizontal plate, as in Figure 25.19.5. The plate forms the bottom of a chamber that applies thermal stressing to products mounted atop the plate. In the early ‘eighties such activities were called ESS or environmental stress screening. With increased intensities and decreased time, ESS became known as HALT or highly accelerated life testing.
On such platforms, spectra don’t come very close to Figure 22.5.5. Spectral control is difficult. 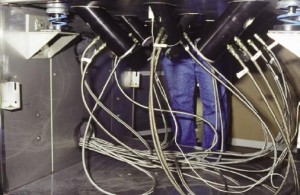 Post production, called HASS
Once past ESS or HALT, a product enters production, where further weaknesses might be introduced. Now it’s time for HASS or highly accelerated stress screening, applying multiaxis random vibration and temperature stressing to a sampling of produced units. Again, be happy when failures occur. Find the causes. Improve the production method.

Now call it “rugged”
Only products that have passed environmental tests and been environmentally screened should be identified as “rugged”.

University lack creates niche
The lack of environmental engineering awareness, even among mechanical engineering graduates, has created the niche into which Equipment Reliability Institute fits. ERI offers short “closed” courses at manufacturing facilities, for their designers of rugged products and for their environmental test personnel. The hands-on “test lab” session is highly valued. Some designer attendees, for example, have never before seen a shaker. For some reason, they’ve failed to visit their own lab.

Few MEs familiar with term “vibration”
We can define vibration as mechanical oscillation or motion about a reference point of equilibrium.

Few MEs familiar with term “shock”
We can define mechanical shock as a transmission of kinetic energy into a system in a relatively short interval compared with the system’s natural period.